The Red Devils have now won six matches on the bounce in all competitions and not lost away from home since being thrashed by Manchester City in September. 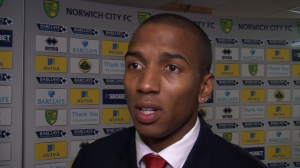 After the match, I interviewed United winger Ashley Young who highlighted the importance of his team’s resilience on the road, and Norwich defender Russell Martin – who admitted it was crucial his team return to winning ways after four successive league defeats.